Friends, I’d like to tell you about the Quitting Pact.

Senior year does some crazy things to you. It shows you a really good time. It scares the shit out of you. It drapes you in a thick blanket of nostalgia. It forces you to think about what’s next, and it makes you appreciate what you have left.

But mostly, it makes you want to drop all of your plans for the future, curl up in a ball, and refuse to move out of this little bubble you’ve grown to love.

You know the feeling? You’re sitting at your kitchen table, your favorite corner of the library, your usual napping couch in the MUB, and the thought occurs to you. What if I just quit absolutely everything and stayed in this spot forever? This very spot where I feel most happy and comfortable and content?

You know it’s not really an option. It’s not even what you really want. But just for a second, it’s the picturesque mirage-island in the overwhelming dessert that is the end of college.

On a rainy afternoon last semester, my friend Will walked into the office where we work on campus with a heavy backpack and an expression like I’ve had enough of this goddamn day.

(Will is a coworker of ours, a graduate accounting student, and a dear friend. He’s great for advice, a coffee from the Shack, and for impromptu additions to blog-posts-in-progress. Hopefully he’s happy with his formal introduction to BlogLand.) 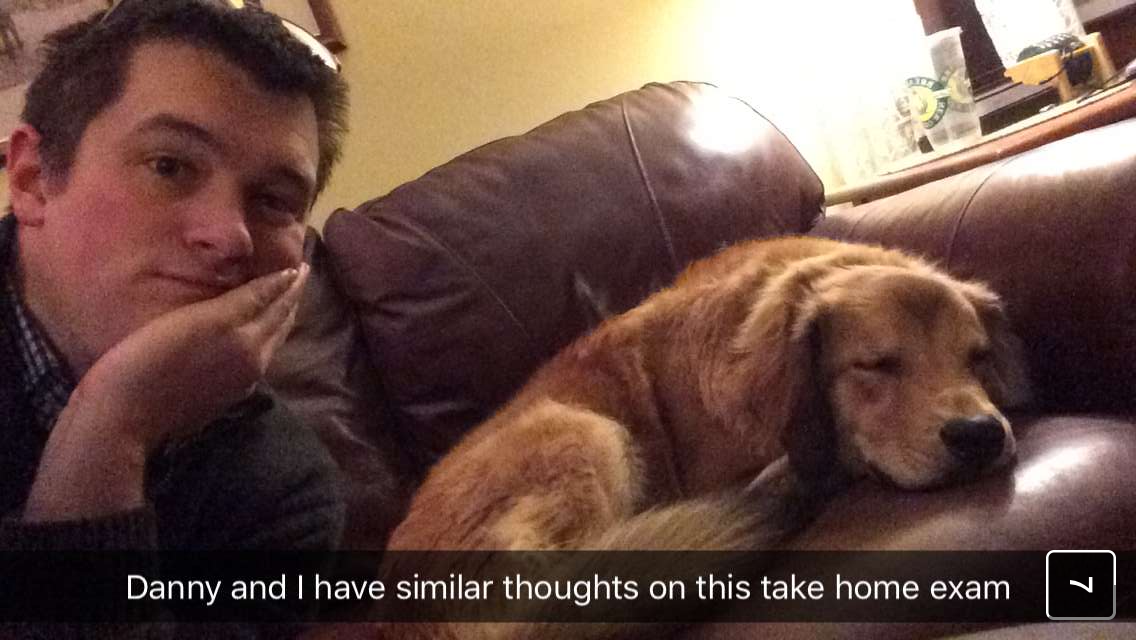 As he realized that he’d be spending the next six hours watching accounting lectures, he posed a question to the office at large. “Why can’t I quit everything and just work in the OSIL forever?”

This might have been the most rhetorical question ever, but one of our supervisors decided to answer it both literally and extensively.

“Well, for starters, your program won’t be happy with you quitting on them. You also won’t get your tuition back for the semester. You’ve already committed to a job, that one might be illegal to back out of. Not to mention that I couldn’t hope to pay you as much as you’d make as an accountant.”

Bummer city, right? All hopes of quitting were crushed by the heavy fist of logic. But that didn’t stop us.

Just as our boss finished his spiel, our friend Alison strolled into the office. (Alison’s graduating too, and equally as awesome as Will.) “Did someone say let’s quit everything and live in the OSIL forever?!”

Our boss shook his head and laughed behind his hands. “You have even more things that you bindingly can’t quit than he does,” he said. Alison’s only response was, “QUITTING PACT! Let’s do it!”

I was on desk this whole time, so I spun around in my chair with my hands up and yelled, “QUITTING PACT? I’m in!”

You know what crushes logic in the rock-paper-scissors of life? Blind denial. Thus, the Quitting Pact was born.

Right now it’s an elite group of students who are committed to ignoring the impending doom of May graduation in hopes of working at our goofy, loveable work-study jobs forever. (We’re taking applications for new members if you think you’ve got what it takes. Qualifications include 3-5 of procrastination experience and an innate love for plastic plants.)

(The OSIL had a beloved pet bamboo shoot named Jefferey who went missing this January. Any information on his whereabouts is greatly appreciated #WhereIsJefferey)

I think, more than anything, the Quitting Pact is a testament to our little bubble. (It’s also a fun way to annoy our bosses.) We work in the Office of Student Involvement and Leadership in a building called the MUB, which is known for being the “living room” of campus. Basically, it’s the place where you can walk in, kick off your shoes, and fall asleep on a couch and no one will make fun of you or draw stuff on your face. The policy here is friendliness, inclusion, and generally being a goofball.

It really is the best. Our office has these sweet polka dot couches and big windows along one wall so you can wave at friends and tour groups as they walk by. You get to share a desk with some really cool people, sometimes helping students with their student-org-problems, and sometimes watching Youtube videos of fish being launched from a cannon.

(Worth the watch, I promise.)

Thanks to the OSIL, I’ve made some great friends and found a second home on campus. Sometimes it’s felt so homey that I’ve considered never leaving. #QuittingPact2016.